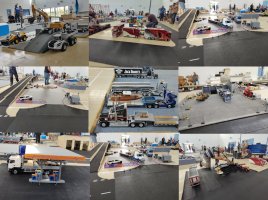 A manic flurry of activity, meetings, and gathering thoughts day and night, but most importantly looking for a venue to meet the clubs needs, as it all revolved around the venue.

The Committee was formed and all our roles agreed, then hours and hours of work, bringing it all together.

It wasn't just the layout, the list of other stuff to do was endless and still growing, as we all went about our individual designated tasks, and finally bringing it altogether as a team.

Somebody had some crayons and we came up with an idea for the club logo, but we quickly realised we could do with some help, we contacted a talented local Graphics Designer, who despite a holiday in the US, took time out to have a Zoom Call with us and design our fantasic logo.

Fast forward to Sunday 12th September, as we all drive to Weston Super Mare, with two vans, a trailer and two cars full of the layout and supporting items.

We knew even with the best laid plans the first time would be hard, and there's no going back now!

08:45 and the set up team are outside our venue waiting to get in. 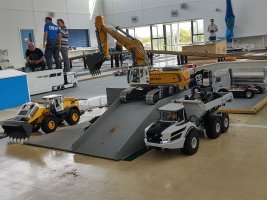 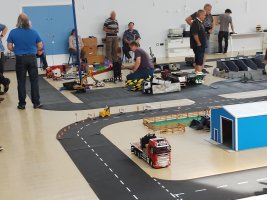 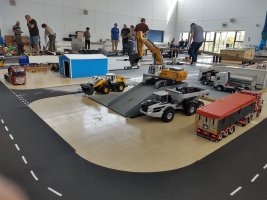 First view of the new bridge, our original idea was a small bridge to cross e.g. a river, what happened to that? 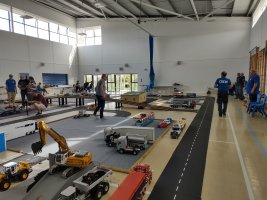 You can get an idea of the size of the layout, that straight is around 18 mtrs long. 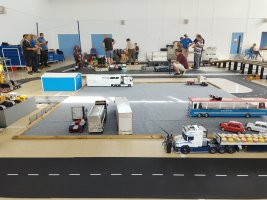 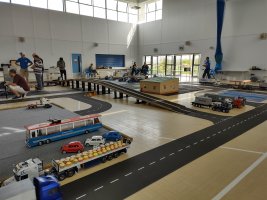 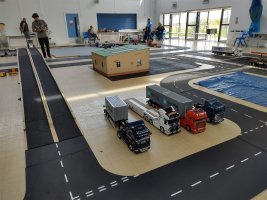 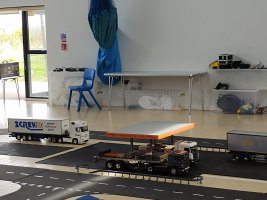 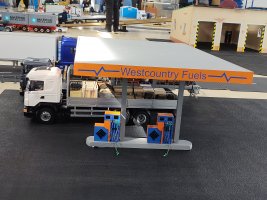 Who has vandalised the fuel pumps. 8 days printing, days of painting, gluing and vinyl cutting. The layout makes it look small. 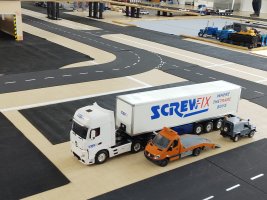 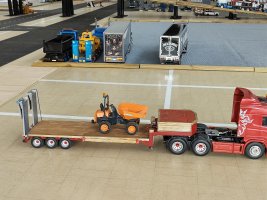 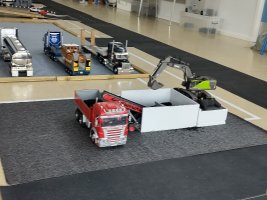 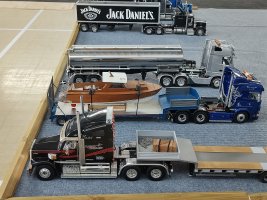 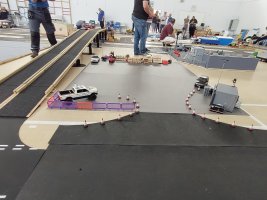 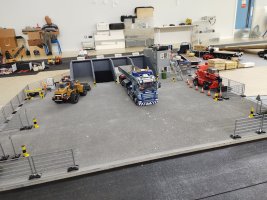 We had a few donations of items for the layout which were thankfully received. See which small details you can spot!

By 15:00 most people have said their goodbyes and the Tear Down team start to pack up, the layout dismantled and loaded, hall swept, kitchen cleaned, carpets vacuumed, site all secure in an impressive 50 minutes!

We had agreed to have a debrief straight after the meeting so happy but tired, we adjourned to a local hostelry where we all enjoyed a celebratory drink and talked over the success and positivity of the day and a few bits we need to tweak to make the experience even better, and it's all in hand for future meets.

Onwards and upwards. What's next? Come back next time and see! Until then here is a video that Jim Bond kindly did of the layout

Don't forget it's your Club, we welcome your suggestions and ideas, we only manage it on your behalf.